When former US President Barack Obama delivered his famous ‘Speech to the Muslim World’ in 2009, he quite predictably trotted out the favorite verse of Western apologists for Islam. A verse seemingly custom designed to prove that Islam is indeed a ‘Religion of Peace’. Here are the President’s exact words: ““… The Holy Qur’an teaches that whoever kills an innocent — it is as if he has killed all mankind” (Cairo Speech to the Muslim World, 4 June 2009)

It is hard to imagine a more uplifting sentiment. Yet, things are not nearly as simple as it would seem on the surface! It should, for starters, be pointed out that the president inserted a word that is not in the text. That word is ‘innocent’. That is simply not part of the original Arabic. The fact that he, or his speech writers, felt the need to ‘improve’ the text should immediately alert us that there may be more to this bit of the Qur’an than meets the eye. And so, it proves, Gere is the entire passage (with the bits the president quoted in bold) in full:

On that account: We ordained for the Children of Israel that if any one slew a person – unless it be for murder or for spreading mischief in the land – it would be as if he slew the whole people: and if any one saved a life, it would be as if he saved the life of the whole people. Then although there came to them Our messengers with clear signs, yet, even after that, many of them continued to commit excesses in the land. The punishment of those who wage war against Allah and His Messenger and strive with might and main for mischief through the land is: execution, or crucifixion, or the cutting off of hands and feet from opposite sides, or exile from the land: that is their disgrace in this world, and a heavy punishment is theirs in the Hereafter. (Qur’an 5:32-33)

It should be clear from the above that these verses are not blanket condemnations of violence in the name of Allah (see especially the statements I underlined above). In fact, the Qur’an here prescribes horrific methods of execution for those who ‘makes mischief’ against Allah. Such people are to be crucified and have their limbs amputated. The Arabic word used for ‘mischief’ here is ‘fitna’ and the classical Muslim commentaries on this verse makes it clear that the rejection of Muhammad as a Prophet qualifies as ‘fitna’. So, far from declaring that all humanity is ‘innocent’, the way in which this word is traditionally interpreted makes it clear that non-Muslims are certainly not innocent and those who strive against the prophet can be put to death in the most barbarous ways possible.

The way in which this verse is used by those who want to cover for Islam in our society is deeply ironic. Critics of Islam, like myself, are often accused of quoting the Qur’an out of context. This despite every effort being taken to handle the Qur’anic text responsibly and in line with classical Muslim interpretive principles. Yet, all that Western apologists can do to get Islam off the hook for violence committed in its name is to, in fact, make use of wildly out of context quotations from the Qur’an. In this case transforming a bloodcurdling exhortation to violence against unbelievers into a warm and fuzzy call for universal peace. The mind boggles.

For much more on what the Qur’an actually teaches on violence in the name of Allah, see my book ‘Nothing to do with Islam? – Investigating the West’s Most Dangerous Blind Spot’

I have often written about Islam’s ‘Free Pass’. This is the tendency, very prevalent in the West, to refuse to subject Islam to the hard questions that are routinely asked about other faiths and ideologies. This means that some people who regularly pride themselves in being feminist, pro-LGBTI and open minded will in the next breath fawn about the ‘diversity’ that Islam brings. Never mind that Islam is deeply antithetical to each of those values.

It may come as a surprise to some that this tendency is not only observable on the popular level but even in academia. In countless universities and research institutions the foundational principle of free inquiry has given way to uncritical acceptance of Islam’s truth claims about itself.

Nowhere is this truer than in the field of history. In the very same institutions where deeply critical questions about traditional historical accounts dealing with every conceivable period are being asked, Islam’s history is treated with kid gloves. The very same historians who one moment would say ‘Question everything’ will essentially turn around and sanctimoniously intone Ernest Renan’s famous (and famously wrong-headed) dictum that ‘Islam was born in the full light of history’.

With the desire to give Islam a free pass, standard historiographical principles are turned on their heads. In all other forms of history writing, a focus on contemporary primary sources are seen as the gold standard. Yet, when it comes to Islam, accounts written 200-300 years after the traditional death date of Muhammad are glorified as ‘the best we have’. Even as much earlier documents that can be reliably dated from the days of the Arab Conquest are being resolutely ignored.

The absolute refusal among some historians to ask critical questions about how Muslim history came to be written is more than just a bit of forgivable intellectual laziness. It allows Muslim demagogues to make wildly overblown theological claims based on Muslim history that they can use to whip up the masses to recreate that ‘history’ in the present. The attempts by ISIS to ‘re-establish’ a supposedly vanished perfect Caliphate is a clear example of this.

Let’s be clear. Massive questions can and should be asked about the reliability of Muslim history. Questions that have the potential to shake the theological edifice of Islam to its core. This is a conversation we absolutely need to have. Especially given the challenges Islam is posing to the non-Muslim peoples of the world. May I, therefore, encourage you not to give Islam a free-pass in this area but to educate yourself to ask the hard questions?

My book ‘The Mecca Mystery – Probing the Black Hole at the Heart of Muslim History’ is essentially a re-examination of early Muslim history based on primary sources and would be a good place to start a quest to reappraise what you think you know about Islam’s early years. 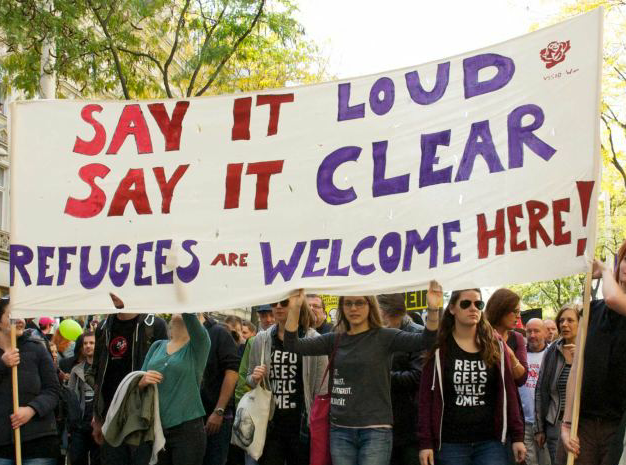 It is truly incredible how Western politicians stumble into actions that wide ramifications for their countries, without asking even the most basic of question. One question that has almost even been raised in the context of increased Muslim immigration is whether there is a link between migration and jihad in Islam?

It turns out that there is. Incontrovertibly so. According to the Qur’an, emigration and “Jihad in the cause of Allah” were two sides of the same coin for the earliest Muslims, including Muhammad. The origins of Islam as a belligerent political entity can, in many ways, be traced back to the hijrah or migration of Muhammad and a band of his followers from Mecca to Medina. This event is seen as so important in the development of Islam that it represents the starting point for the Muslim calendar.

The pattern of viewing migration as a precursor to jihad left deep traces in the Qur’an. For example:

This strong praise given to the earliest Muslims who migrated to advance the cause of Islam gives modern Muslims a strong example to follow. It is interesting to note that this example means that migration with a view to undermine and eventually take over non-Muslim societies was seen by early Muslim theologians as the one exception to the general rule that Muslims should always seek to live under Muslim rule. This viewpoint was strongly reinforced by a hadith in which Muhammad says: “There is no migration (after the conquest), except for jihad and good intentions, and when you are called for jihad, you should immediately respond to the call” (Sahih Bukhari Volume 4 Book 52 Hadith 42)

It is, therefore, an accepted part of the Muslim belief system that it is permissible to live under non-Muslim rule if the understanding is that you are to subvert the non-Muslim society and even take up arms against it if necessary. I am obviously not suggesting that all Muslims in non-Muslim countries see this as their ultimate reason for being there, but we do need to understand that there are some for whom this is true.

Indeed, there have been Muslim groups who have made emigration for the sake of jihad a key part of their identity. The name of the, now banned, U.K. Muslim group Al-Mujahiroun (responsible for about 50% of terror attacks carried out in or originating in the U.K.) translates as “the emigrants” and it refers straight back to the Qur’anic verses that were cited above counselling “emigration in the cause of Allah”. Members of this group repeatedly made it clear that they had no loyalty whatsoever to the United Kingdom and that they saw the ideal of seeing the “black flag of Islam” flying over 10 Downing Street (home of the British Prime Minister) as their reason for being in the U.K.

All of the above should make for very sobering reading in light of the fact that most Western countries are experiencing unprecedented levels of inward migration from Muslim societies. In some cases, (e.g., the refugee crisis caused by the Syrian civil war), people are being allowed to enter Western countries without even the most basic background checks being conducted. I am not, for one moment, suggesting that every single refugee or migrant from a Muslim country settling in the West are doing so with the intention to subvert their host countries for the sake of Islam, but some clearly are. Are such people carefully screened out?

Given the sheer numbers and the level of denial in the West regarding the intentions of Islam, it is highly unlikely that anything more than the most rudimentary checks are carried out. This has been all too graphically confirmed by the fact that some of the perpetrators of the November 2015 Paris attacks passed through Greece, sheltered by the stream of refugees that were entering Europe from Turkey

We must face up to some very serious questions on the issue of Islam and migration. There must obviously be some among the stream of Muslim migrants entering Western nations who take seriously Muhammad’s words that “there is no migration except for jihad”. If so (and it would be foolish in the extreme to suggest otherwise), what percentage are we comfortable with? 20%? 5%?

Even if we settle for the ludicrously low percentage of only 1%, it means that Germany (which took in 1 million migrants from the Muslim world in 2015) has imported 10,000 people during a single calendar year who will do everything in their power to overthrow the German state. How will the current crop of Western politicians explain their rash actions to the next generation when these Qur’an 2:218 type “emigrants” (i.e., those who have emigrated and fought in the cause of Allah) begin to unleash carnage in the name of Islam?

The link between migration and jihad is further explored in my book ‘Nothing to do with Islam? – Investigating the West’s Most Dangerous Blind Spot’