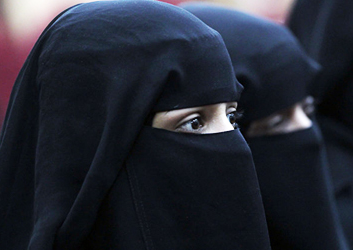 Muslim apologists often proudly claim that Islam liberated women from the terrible conditions they lived in before the coming of Muhammad. Yet, it is probably fair to ask what exactly this ‘liberation’ means if Islam condemns women to hell simply for being women.

Allow me to explain. According to the most revered collection of ahadith (traditions) the ‘prophet’ Muhammad once passed by a group of women. He told them: “O women! Give alms, as I have seen that the majority of the dwellers of Hell-fire were you (women).” They asked, “Why is it so, O Allah’s Apostle?” He replied, “You curse frequently and are ungrateful to your husbands. I have not seen anyone more deficient in intelligence and religion than you. A cautious sensible man could be led astray by some of you.” The women asked, “O Allah’s Apostle! What is deficient in our intelligence and religion?” He said, “Is not the evidence of two women equal to the witness of one man? “They replied in the affirmative. He said, “This is the deficiency in her intelligence. Isn’t it true that a woman can neither pray nor fast during her menses?” The women replied in the affirmative. He said, “This is the deficiency in her religion.” (Sahih Bukhari 1:6:301)

So here we see Muhammad not only cheerfully consigning the majority of women to hell but doing so based on a staggeringly misogynistic claim. You see, women have periods which in Islam means they cannot pray as often as men (as they are supposedly ritually unclean during menstruation). Fewer prayers means less merit in the eyes of Allah. Because of this their religion is ‘deficient’ and many are condemned to hell. Oh, and they are ‘deficient in intelligence’ as well!

Are we to understand that Allah (supposedly the ‘Compassionate and Merciful’) created women to have periods and bear children and then metes out terrible eternal punishment for being who they were created to be?