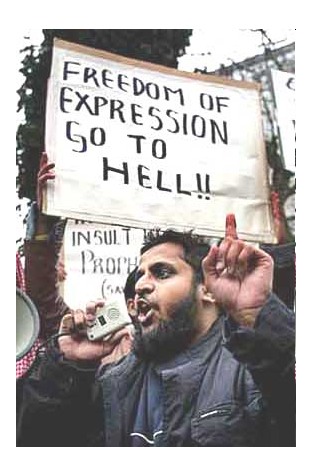 Modern Muslim apologists, seeking to give their prophet a bit of an image makeover, often insist that Muhammad was a champion of human rights. Considering this we are entitled to ask how Muhammad would have reacted to those who threaten and, in some cases, kill people (e.g. the Charlie Hebdo cartoonists) for ‘insulting’ him.

It is not hard to work out the answer, and the implications are chilling.

Perhaps the most famous critic of Muhammad during his lifetime was a poet named Asma bint Marwan who wrote satirical verses against him. Muhammad did not appreciate this (to put it mildly) and made sure that she was silenced in the most brutal way possible.

Muhammad’s biographer, Ibn Ishaq, relates the story: “When the apostle heard what she had said, he said ‘Who will rid me of Marwan’s daughter?’ `Umayr b. `Adiy al-Khatmi who was with him heard him, and that very night he went to her house and killed her. In the morning, he came to the apostle and told him what he had done and he [Muhammad] said, ‘You have helped God and His apostle, O `Umayr!’ When he asked if he would have to bear any evil consequences the apostle said, ‘Two goats won’t butt their heads about her’, so `Umayr went back to his people.” (The Life of Muhammad – A Translation of Ishaq’s “Sirat Rasul Allah”, p. 675—676, A. Guillaume, Oxford University Press)

The terror and fear caused by the actions of Muhammad quickly convinced the people of his victim’s tribe to embrace Islam. Was this out of deep conviction? That is not how Ibn Ishaq relates it: “The day after Bint Marwan was killed, the men of B. Khatma became Muslims because they saw the power of Islam”. According to Sahih Bukhari (Volume 4 Book 52 Hadith 220), Muhammad declared: “I have been made victorious by terror [cast into the hearts of the enemy]”. This seems to be exactly what happened with the men of Asma Bint Marwan’s tribe. Her death cast terror in their hearts causing them to hurriedly convert to Islam.

Not quite a champion of human rights and free speech, you would have to agree. This is just one of the many examples of where the ‘prophet’, who is often portrayed as a Gandhi-like figure for the benefit of gullible Westerners, acted more like a mafia boss than a great spiritual leader. So, next time when you hear a friend express surprise at the often-violent reactions to criticism of Islam, please be so kind as to point him or her to the source. The ‘perfect example’ (Qur’an 33:21) himself.

For more on the ways in which contemporary acts of violence can be traced straight back to Islam’s source documents, please see my book ‘Nothing to do with Islam – Investigating the West’s Most Dangerous Blind Spot’