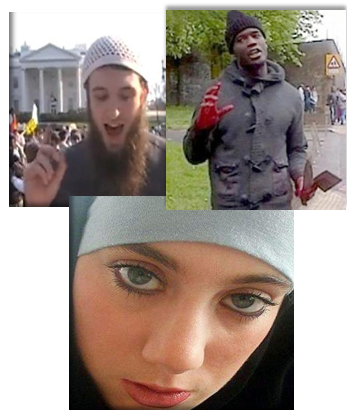 Here’s a little experiment: Think back for a moment to every single ‘Good Boy/Girl Turned Jihadi’ story you’ve ever read or seen on television. What was the one constant in all of them?

I can almost guarantee that you will find some kind of ‘but then’ statement in all such narratives. Statements like:

Statements like these are significantly at odds with the prevailing discourse surrounding Islam in our society. We are constantly told from a variety of directions that Islam is a ‘religion of peace’ and that those who invoke it to justify violence misapply its essentially tolerant teachings. In response we must ask: Why is it that converting to Islam, or becoming a more devout Muslim, so often lead to a burning hatred for unbelievers? Shouldn’t becoming more attached to a peaceful religion cause us to become more peaceful as a result?

No doubt those who are anxious to hold the ‘Islam means peace’ line will be quick to assure us that these stories are aberrations and that the very predictable trajectory to jihad followed by so many can be explained away by stating that those who follow this path do so based on a misunderstanding the true nature of Islam. To which we must ask: How is it that so many millions of people over the centuries have ‘misunderstood’ Islam in exactly the same way? Could it not be that there is something in the essential teaching of Islam that is motivating the actions of the jihadis?

This is the question that I look at in detail in my book ‘Nothing to do with Islam – Investigating the West’s Most Dangerous Blind Spot’. The question about whether Islam is indeed a ‘Religion of Peace’ is far too important to leave to the talking heads of the media. May I strongly encourage you to honestly investigate the issues. Perhaps you will find that the ‘convert conundrum’ is not such a great mystery after all!